Sixth round saw some dramatic action off the Board as two players, both from Mongolia, WGM Bathimeg Tuvshingtus & FM Battulga Namkhai reported 5 seconds late to the Board and lost their games to IM Tania Sachdev of India & GM Marodiabadi Elshan of Iran respectively.

All players who finish their games may rest at the Players Lounge where refreshments are made available. For unknown reasons, the two Mongolian players were not to be found compared to all others who were already seated five minutes before start. As the countdown clock ticked away, everyone were staring at the main entrance and as the Chief Arbiter announced start, the two players started to run inside but were already too late.

More drama was in store as the Lady Manager of Bangladesh was poorer by 2,000 Yuan (US$300) as she had to pay penalty for allowing her phone to ring in the tournament hall. 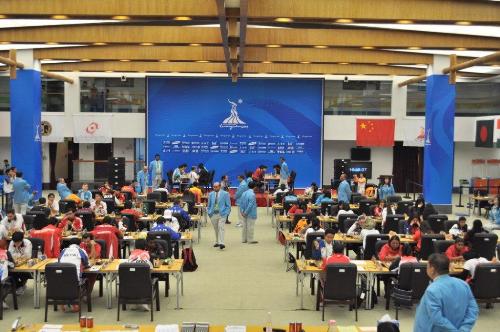 Day three had three rounds and at the end of seven rounds, in the 16th Asian Games being held at the Guangzhou Chess Institute, 3rd seed GM Kasimdzhanov Rustam of UZB is leading with 6/7 after defeating top seed Le Quang Liem of Vietnam in the Men section.

Top seed Hou Yifan is racing away from the field with 6.5/7 in the women section, with a clear one point lead. Zhu Chen(QAT) was her victim in the seventh round. She dropped half a point in the sixth round when Harika of India held her to a draw.

Fight for the top honours in the Men section is turning out to be very close as three players – Krishnan Sasikiran of India, Bu Xiangzhi of China and Le Quang Liem of Vietnam – are trailing closely half a point behind the leader. Three others Ganguly (IND), Megaranto Susanto (INA) & Filippov Anton (UZB) are in the fifth place with five points. Sasikiran beat So Wesley, Bu Xiangzhi beat Ni Hua.

Zhao Xue (CHN) & Pham Le Thao Nguyen (VIE) are in the second spot behind Hou Yifan with 5.5/7. Three others Harika & Tania (both IND) & Hoang Thi Bao Tram (VIE) are in the fourth place with 5 points each.

Two rounds will be played Tuesday and the Medal ceremony will be held thereafter. The games start at 3PM daily and are shown live on asia-chess.com 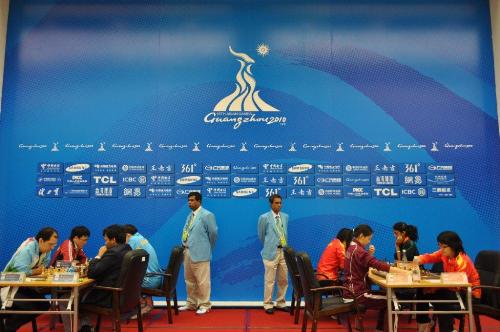