Rustam Kasimdzhanov of Uzbekistan in men and Hou Yifan of China in the women section won the Rapid Championship of the 16th Asian Games which concluded today at the Guangzhou Chess Institute, China.

Kasimdzhanov and GM Le Quang Liem tied with 7.5/9 and the head to head result was resorted to determine the winner. Kasimdzhanov had beaten Liem in the seventh round and the top-seeded Liem had to settle for Silver. The Bronze medal went to Bu Xiangzhi of China, also by way of tie break (both had 6.5/9), as he had beaten Murtas Kazhgaleyev of Kazakhstan in the sixth round.

Hou Yifan did not give any problem to the computers as she was a clear winner by scoring 8.5/9 and gave China their first Gold in Chess Rapid Individual. The other medalists were also clear winners with China’s Zhao Xue (7.5/9) & Harika Dronavalli of India (6.5/9) winning the Silver and Bronze Medals respectively.

In the last round Kasimdzhanov settled for a draw with GM Sadvakasov Darmen of Kazakhstan. Bu defeated Krishnan Sasikiran while Kazhgaleyev defeated the other Indian Ganguly. Both the Indians had a chance to be on the podium. 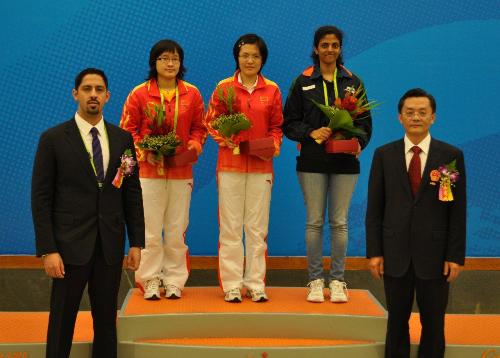 Hou Yifan beat Tania Sachdev of India while Zhao and Harika defeated their rivals Nafisa Muminova of Uzbekistan and Irine Sukendar of Indonesia respectively in the 9th and final round to emerge victorious.

After a day’s rest, the Team Championship matches start on the 18th and are shown live on asia-chess.com