Carlsen started White pieces with his favourite Catalan opening to which Ponomariov responded with a rare line in the Open variation. Black’s idea was to quickly exchange two pairs of minor pieces and reduce opponent’s attacking potential.

Black’s position was solid, albeit passive. Carlsen tried to gain central control and expand on the kingside, but Ponomariov limited his activity by pressing the backward d4-pawn. Next, Black blocked the kingside. White attempted to open the position, but he couldn’t do much while several of his pieces were obliged to protect weak pawns. Draw was agreed right after the 30-move limit was reached. Replay the annotated game. 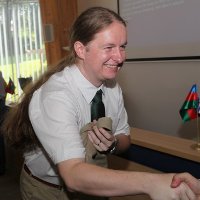 Radjabov returned to his trademark Sveshnikov Sicilian in the game against Nisipeanu. As it was to be expected, top Romanian player opted for a quiet continuation 11.c4, hoping to gradually collect small positional pluses. Further, Nisipeanu traded his fianchettoed Bishop and continued to play N vs B with all heavy pieces on the board. He commonly induces such small imbalances.

The game was already deep into the time trouble by then, and Radjabov’s impatient 29…d5 caused him major trouble after White Knight nested on d6. Nisipeanu calmly handled the position and Radjabov resigned ten moves later facing a huge material deficit. Replay the game with computer analysis.

Gelfand took aggressive route against Wang’s Chebanenko Slav, but after the exchange of a single pawn on move 17 nothing much happened until the time control. Lots of maneuvering by White, while Black set the perimeter on the 7th rank and patiently waited.

Finally, 43. Nh4 brought hopes for a new course of the game. Gelfand’s idea was to sacrifice an exchange and grab the g6-pawn. Wang sunk into deep 30-minute thought.

Black organized his defence, but White was able to break through the ranks with another fantastic blow 48. Nh8!, which after couple of exchanges eventually left him with an extra pawn.

The focus then shifted to the queenside, where Gelfand wanted to open the files, thus forcing Wang to trade off the Rooks and allow White Bishop back into the play. Black was unable to protect the weaknesses on both sides and Gelfand finally pulled a victory on move 82. Replay the game with computer analysis.