Viktor Erdos achieved a GM norm at the June edition of the First Saturday tournament. He finished top of the GM group with 8.0/11. IM norm went to FM Goh in IM B and he won the tournament with 8.0/11. FM Toth achieved an IM norm in IM A with 8.0/11, but the group was won by IM Michal Luch with 8,5/11. 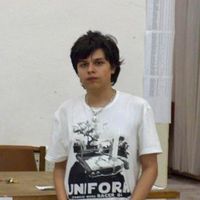 It is strange to find higher rated players in IM B group of the First Saturday June tournament. The average ELO is 2270, and the highest rated is IM Miklos Galyas (HUN, ELO 2444).

GM Vajda Levente (ROM) increased his lead on the top of the GM group and is first with 6.0/7. It turns out to be a fantastic tournament for the Romanian GM and until now he has a tournament performance of 2710, almost 200 points more than his rating. The second place is held by Mark Bluvshtein with 5.0 and third place is divided by IM Roussel-Roozmon and IM Erdos with 4,5/7.

In IM A the first place is held by FM Ervin Toth with 5,5/7. FM Toth is heading towards a norm and has relatively easy games until the end. The only match that may cause him problems is against IM Peter Doggers, who is currently third with 4,5/7. Second place is held by IM Michal Luch with 5.0/7.

IM B is surprisingly led by FM Goh Weiming with 5,5/7 and performance of 2700 + points. Second is IM Dimo Werner with 5/7. The direct game between Weiming and Werner will be decisive for the final outcome of the tournament.

A detailed report on rounds 7-11 is being prepared at the moment. Expect photos and replayable games.

First Saturday May 2007 – report on the May edition

First Saturday – all articles about the tournament