The 2011 Tradewise International Chess Festival got underway today at the Caleta Hotel, Gibraltar. At precisely 3pm the Mayor of Gibraltar Tony Lombard made the first move with the top seeded player in the tournament Vassily Ivanchuk. Mr Lombard was accompanied by the reigning Miss Gibraltar Larissa Dalli.

The Mayor welcomed all the players to the Rock acknowledging the success of the festival and how highly regarded it was by all chess players around the globe.

The Mayor of Gibraltar was particularly impressed by the phenomenal growth experienced by the Tournament saying: “This is really staggering and clearly reflects the growth of Gibraltar in so very many areas; save, it occurs to me chess may well be an undoubted leader, in that respect. It really was ‘the Comity of Nations’ under one roof and it is a special accolade to the event that it can gather so very many representatives from such far flung Nations, with many of such standing and renown in the field. It is a sport event in which we in Gibraltar can compete with the rest of the world and the organisers are to be congratulated, in placing us upon the map, in such a successful manner.” 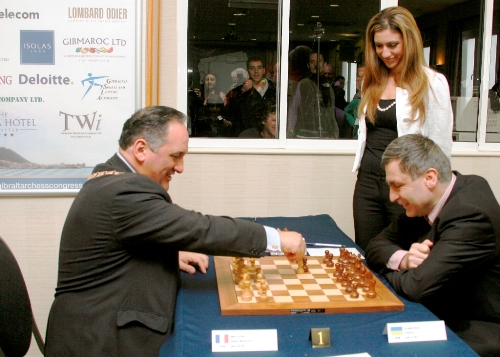 Mayor of Gibraltar Tony Lombard made the first move with the top seeded player in the tournament Vassily Ivanshuk. Also in the picture is Miss Gibraltar Larissa Dalli.

Mr Lombard added: “Whilst we might not be able to host an Olympics or World Football, for obvious reasons, we certainly can do so in Chess and that is the niche market we have to explore, taking advantage of the all the circumstances, so that Gibraltar features and does so splendidly.”

Live streaming with commentary is available every afternoon with the new commentator for the festival Grandmaster Simon Williams. Once again the tournament boasts the latest technology installed by Gibtelecom.

The new tournament director and who until now has been the voice of the tournament on the internet, Stuart Conquest, will be joining Simon over the next 10 days. These commentaries are broadcast live on the congress website www.gibraltarchesscongress.com. 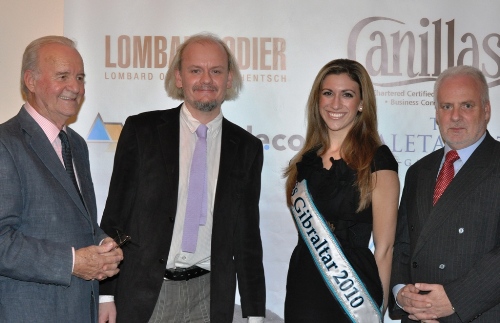 At the Opening ceremony on Monday night, where the pairs in the initial games were drawn by Miss Gibraltar, Gibraltar’s Sports and Leisure Minister Edwin Reyes recognised the overall success of the festival. Also at the ceremony were tournament organiser Brian Callaghan, James Humphreys from Tradewise Insurance the main sponsors of the tournament, and Tim Bristow from Gibtelecom still very much involved in providing and developing the internet live stream.

On day one Minister Reyes said the tournament was important because yet again in another sporting event Gibraltar proves that it means business and wants to be part of the international fraternity.

“Chess is the most international event which the Rock organises only matched by the Ultra Marathon which secures both European and World Championship points but it is the chess festival which attracted the largest number of international entrants. It is not just the critics that say so but the players themselves who now regard the Gibraltar festival as one of the top tournaments,” he said.

The Minister stressed that the Gibraltar Government was very supportive of this international event. “We thank all the sponsors because we want to be partners with them, we don’t think this should rest just with government itself but government needs to be a player too. We are fully supportive of the the organisers, and fully behind them because we want next year’s tenth anniversary to be the huge success it deserves to be, and may the sky be the limit after that,” he added. 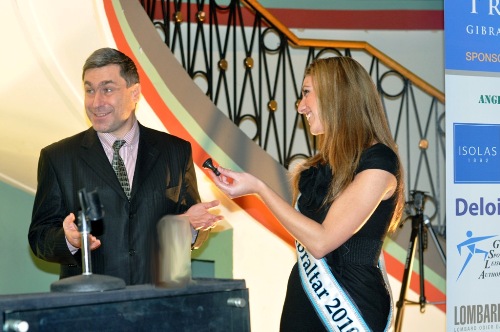 “Black is OK!”, says Vassily Ivanchuk as Miss Gibraltar, Larissa Dalli, draws the black pieces for him in Round 1 at the start of the festival.