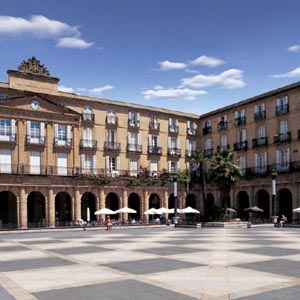 Welcome to the multi live coverage of the final round of Mtel Masters 2009 on Chessdom.com! Today we will follow the development of all games at the Sofia super GM tournament, including games commentary, news updates, photos, interviews, and the closing ceremony. The live coverage will continue until 22:00 CET at night!

Three players have the can climb on top and win the title of Mtel Masters. However, the big intrigue is in the game Carlsen – Shirov that you can follow with live GM commentary here, as from it will come the last finalist for the Grand Slam 2009 final in Bilbao. Veselin Topalov, the other contender for the Mtel title, has already qualified by winning Nanjing.

In case players are on top with equal points, the Mtel Masters rules state the following tiebreak criteria:

* A greater number of wins

* The result of the direct mini-matches between contenders.

* A greater numbers of moves played

However, it is interesting that the organizers will not follow the initially stated rules, and have introduced a last minute change posting a message on the official site, “A tie-break match will be played in case of a tie for the first place in the tournament between the first two players in the final standing.”

It is theoretically impossible more than two players to finish on top with the same points, so that new rule will work out fine.

Two rounds ago Topalov was preparing for such a scenario. He stayed after the game in the glass cube and played two blitz games against FM Kiprian Berbatov (winner of Mtel Masters junior). Topalov won easily the first game with black, but in the second encountered problems with white and was lucky to save a draw. 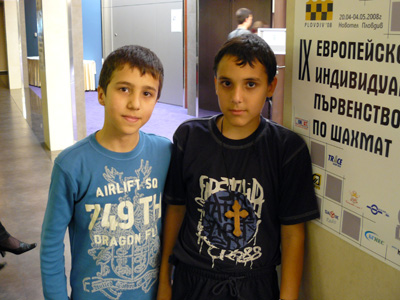 As our friends from e3e5.com report that there was an urgent meeting in Sofia, including the President of FIDE Kirsan Ilymzhinov and the President of ECU Boris Kutin. The meeting continued until late at night. Full details will be available later (we will update details tonight on Chessdom). Update 1: An extraordinary ECU assembly will also take place. The results from the European Championships will be valid and will not be reviewed.

Topalov and Wang just drew their game, which confirms that the winner and the last finalist of the Bilbao Final Masters 2009 will come out from the game Shirov – Carlsen (live commentary here)

The draw of Topalov and Wang also eliminates the possibility of a tiebreak, as the players on top cannot finish with the same points.

The closing ceremony is scheduled for 19:00 CET tonight. It will take place at the square in front of the Ivan Vazov theater.The President Georgi Parvanov, who is also director of the organizing committee of Mtel Masters, will award the winner.

Until then the action continues. Carlsen and Shirov are playing for the big stakes, while Ivanchuk and Dominguez have their own personal fight. The Ukranian is trying to get back into the 2700+ zone, while Dominguez needs to confirm he is one of the most stable and difficult to win against players at the Grand Slam series. Both players do not have a single win at Mtel Masters, but the image they are presenting is very different (all results and standings here).

With the speed Ivanchuk and Dominguez are playing they are heading to mutual time trouble. It is interesting how they get up from time to time and watch Carlsen and Shirov entering into a wild endgame.

And just two moves later Carlsen resigned. Shirov is the winner of Mtel Masters 2009! Spain will have their representative at the Bilbao Final Masters 2009.

Veselin Topalov warned everyone before the start of the tournament that he expects surprises exactly from ALexei Shirov and he was right.

Shirov took all the necessary risks in the final game against Carlsen as he needed the victory and his desire was awarded by a blunder by Carlsen.

The young Norwegian also deserves applause for his good games, especially notable the victories against Topalov and against Dominguez. He will be sharing second place with Veselin Topalov, the exact position will be determined by the criteria posted above.

In the mean time severe time trouble for Dominguez who is down to 3 minutes for 10 moves.

Both players are safe through the time control. Now it is essential not to trade rooks in order to avoid direct draw due to opposite color bishops.

Ivanchuk has good winning chances if he advances his pawn with check at f4. Ke5 by Dominguez in time trouble was a mistake disbalancing the game. Still, precision is required in the technical ending.

Ivanchuk found the move and is now heading to a victory. It is interesting to compare today’s winner Shirov to Ivanchuk. Both have had some very difficult moments, yet they surge among the top rated again. Surely Ivanchuk will be back soon in top form and will be winner of strong tournaments. 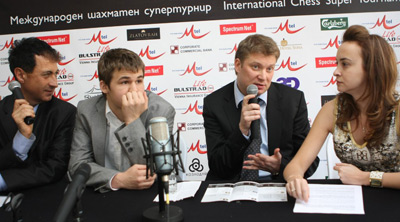 The press conference with Shirov and Carlsen took place after the game. Carlsen was obviously disappointed and was not in the mood for talking. Shirov was pleased with his performance and underlined the difficult opposition he had during the tournament. Stay tuned for details.

Shirov’s victory is a multi achievement. Besides the good share of the prize fund, the first place, the qualification for the Final Masters in Bilbao, he also will have higher rating than Vladimir Kramnik, pushing him away from the 5th position. Shirov has had a fantastic year so far. His form started improving at ECC 2008 and later he had great performance at the Russian team championship and the Schach Bundesliga. Now Shirov will be gunning for the first place in Bilbao, where he will meet Topalov, Karjakin, and Grischuk.

Shirov will be absent from Leon chess 2009, but three other GM participants from the Grand SLam will play – Carlsen, Ivanchuk, and Wang Yue. The fourth participant is GM Alexander Morozevich.

With little time on the clock Ivanchuk is on the winning path. He has secured kingside control and is heading to his first victory in the event.

And Ivanchuk won! This still leaves him at the last place, as the stable draws of Dominguez sum up to more points. Still, it is important note that Ivanchuk cannot be underestimated and will put up good fight in tournaments to come.

Now it is official, Carlsen takes the second position on tiebreak, third is for Veselin Topalov.

The closing ceremony starts in an hour and we will bring you live updates from the Ivan Vazov theater square.

Shirov’s words at the press conference, “I am very surprised I won Mtel Masters. I did not expect and have not studied the variant of the SIcilian defence played today, despite the fact we practiced Sicilian defence with my seconds until late last night. I have to admit the games of Carlsen and Topalov were more interesting, but I am happy with my victory against Dominguez and the final victory of the tournament.”

The closing ceremony has started, with the participation of the FIDE deputy President Georgios Makropoulos. The players received the special prizes from the sponsors. There was high media attention as well. Here are some photos from the event. 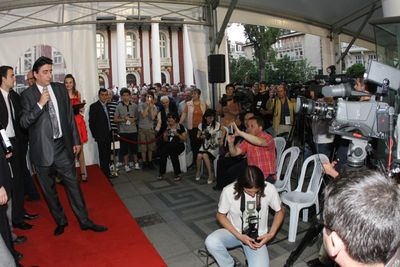 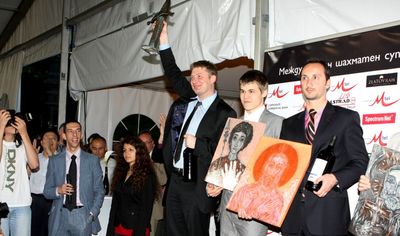 Shirov happy together with Carlsen and Topalov 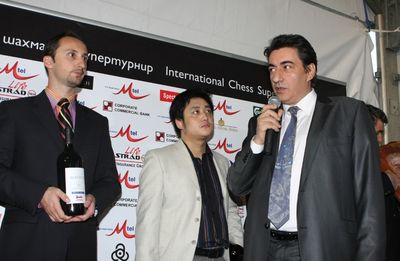 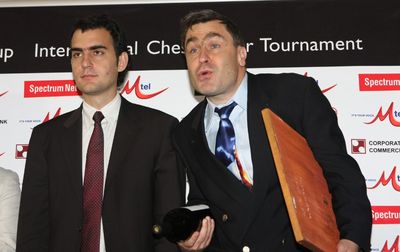 Ivanchuk and Dominguez in good mood.

As many of you have asked the details about the Grand Slam, here is the information that is available at the moment. The presentation in Sofia was based on the success of last year, underlining the category 22 and the big interest. It was confirmed that the format will change and only the winners of Nanjing, Corus, Linares, and Mtel will be present. These are Topalov, Karjakin, Grischuk, and Shirov.

More details were promissed by the organizers, but the press release in Spanish did not contain anything different. We will keep you updated in the next days.

With this our coverage of Mtel Masters finishes. Thank you for following with Chessdom.com and enjoy replaying the games at the Mtel Masters general page.