GM Azer Mirzoev and IM David Lareto together on the top 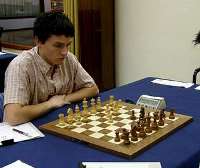 The 20th Torneo Magistral Internacional de Elgoibar was played from 14th to 21st December in Elgoibar, Spain. Ten players competed in the traditional round robin tournament.

Grandmaster Azer Mirzoev played calmly, collecting wins when possible and drawing the remaining games for a total of six points, which was sufficient for the joint first place.

IM David Larino had the more difficult journey to the top of the crosstable. He had a mixed start, with a couple of victories and defeats, the one against the last year’s winner IM Mikel Huerga Leache being particularly painful, in only 17 moves. But then he took off to a tremendous finish, connecting three straight wins to catch up with Mirzoev and earn a Grandmaster norm.