One year before the silver jubilee and despite the financial crisis hitting Spain, the 24th Magistral Ciudad de Leon (June 2-6) will be a very interesting match. The world champion, Viswanathan Anand, will play six rapid games against Alexei Shírov, the Leonardo da Vinci of chess.

The tournament was presented this week in Madrid. GM Miguel Illescas, eight times Spanish champion, recalled that the score between Anand and Shirov so far is very favorable to Anand, who is also a very tough opponent, because his play has no weak points, and even less so in rapid games.

“However”, Illescas added, “the highly creative style of Shirov always leaves some room to surprise”. He concluded: “In any case, it is very likely that we shall see a duel of great interest, a clash of different styles”. 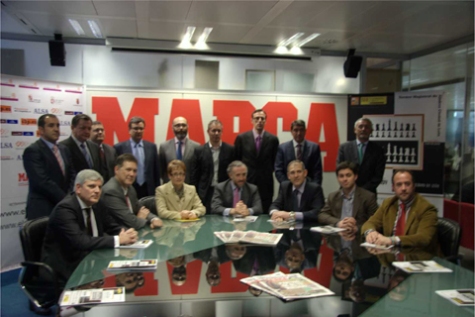 Anand and Shirov will play six games (Friday to Sunday, two per day) with 60 minutes per side plus ten seconds increment after each move in the magnificent León Auditorium. Illescas and IM Michael Rahal will make the live commentary, and the Castilla and Leon TV has scheduled a special coverage, including live broadcasting of some games.

The Leon organizers, whose director is Marcelino Sion, maintain that social and professional chess should function like communicating doors. The parallel activities are consistent with that idea: simuls by Shirov, a lecture by Illescas on the Kasparov-Deep Blue historic match, another lecture class for the local young talents by the IM Sergio Estremera, a chess cinema week and the traditional Young Talents tournament.

Despite the big economic crisis, everything will be sponsored by a balanced combination of public bodies and private companies: a clear sign of how solid this tournament is.