German Grandmaster Jan Gustafsson has won the 2011 Thailand Chess Open in Pattaya after finishing in a three-way tie for first place and winning the title on a tiebreaker.

Gustafsson, seeded third at the start of the tournament, finished equal on points with the top two seeds, Paco Vallejo of Spain and England’s Nigel Short but was awarded the 11th Thai Open title because he had played tougher opposition. Short, who lost to Gustafsson in the critical game of the tournament, was awarded the runners-up cup. The three players shared 220,000 Baht in prize money.

In a dramatic final day of play, Short, 45, seemed to have the most difficult task but he smoothly outplayed Indian Grandmaster Abhijit Kunte. 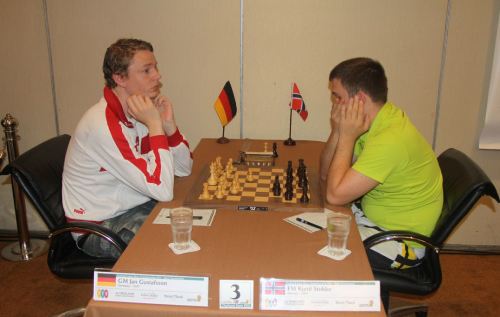 Both Gustafsson, 31, and Vallejo, 28, were required to play tricky endgames against Norwegian youngster Kjetil Stokke and Bangladeshi veteran Niaz Murshed but both outplayed their opponents to reach the tie for first.

Sunday’s final round of Thailand’s largest and strongest open tournament was a grim one for local players with the leading Thailand performer Wisawat Teerapabpaisit missing a chance to reach sixth place after losing to Indian Grandmaster Jha Sriram.