the most important details from the press conference

During today’s press conference in Sofia the Topalov – Kamsky logo was presented to the journalists. Many details about the match were also revealed, scroll down for the most important of the press conference. 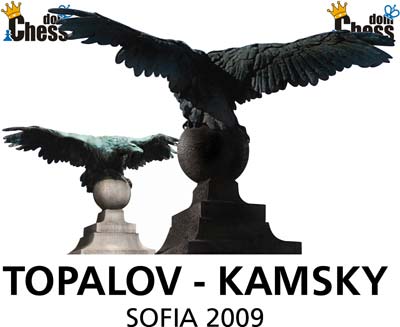 The players have to arrive at 6th Hall of NDK at least 10 minutes before the start of the games for security checks.

The players will be transported every day from the hotels to the playing hall with strict security. Police escort will also be provided at all times.

Strict anti-cheating measures will be taken, no electronic devices or mobile phones will be allowed in the playing hall.

There will be two toilets

There will be two toilets at the venue, however, they are not personal. This means that the players can use whichever toilet they want at any time.

During the games coffee, tea, and snacks will be provided at a separate table, but it will be auto service, so that the players do not have contact with other people.

The teams of the players

Both players will be in Sofia with a team of 4 people. GM Gata Kamsky will arrive in Sofia with GM Sutovsky on the 12th of February. GM Topalov and GM Cheparinov arrive from Spain earlier.

The details about hotels and accommodation are no different than the announced last week at Chessdom.com.

There will be 10 FIDE representatives headed by the arbiter Ignatius Leong. The appeals committee will consist of 3 people. 3 vice Presidents of FIDE will be present as well.

Despite Kamsky’s participation at the Mtel Masters 2006, large group of the journalists present at the press club “Bulgaria” were not acquainted with the US grandmasters and basically didn’t know anything about his career. The Bulgarian Chess Federation had prepared a small presentation, during which was emphasized that Kamsky and Topalov had played several times with the score being 4 victories for Topalov and 4 draws.

The website of Kamsky – Topalov will not be available for a while. As was announced at the press conference, “The servers have just been contracted and the website is going to be available after the 6th of February.” The address of the website, however, remained a deep secret.

With only a week for bandwidth tests it is not sure how the transmission will go. Chessdom.com will have people inside the playing hall, and if needed will update manually the moves. GM Dimitrov and a team of GM commentators will cover the match with live commentary on Chessdom.