Round 5 report by R R Vasudevan

In the girls section, Russian Girya Olga maintained her lead with 5.0 points after putting it across top seed Woman Grandmaster Paikidze Nazi of Georgia. 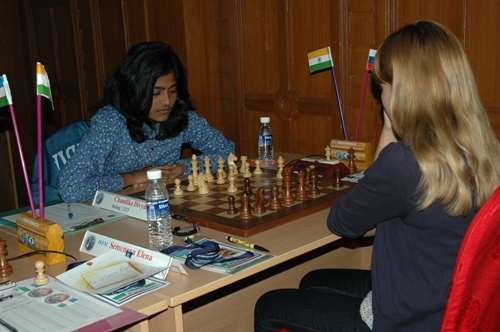 Swayams Mishra, a student of KIIT University from Bhubaneswar, emerged triumphant against GM Martinovic Sasa of Croatia in a Benoni game. “We don’t see Benoni openings at higher levels of play, and it came as a surprise,” said Mishra. “Martinovic stretched a bit more in the middle game, and after the bishop entry into his sixth rank, I felt confident of winning the game,” added the Orissa lad. Though the game stretched to 50 moves, the result was not in doubt, as Swayams kept adding the pressure on the king side. In the resultant open position, Martinovic conceded a big advantage and gave up when he ran out of queen checks.

Karnataka lads Girish Koushik and G A Stany, along with Chennai boy V A V Rajesh put it across their accomplished Grandmaster opponents viz., Durarbeyli Vasif (Azerbaijan), Pap Gyula (Hungary) and Salem A R Saleh (UAE) respectively. Girish, Stany and Swayams moved to shared third spot with 4.0 points, while Rajesh stays further half a point behind at 3.5 points.

Sahaj Grover who began with 3.5 points, had a bad day in office, as he went down to Polish International Master Piorun Kacper. The French game saw the Delhi boy unusually blundering an early piece, losing a miniature game.

The big Indian hope Woman Grandmaster Padmini Rout went down to Romanian Bulmaga Irina in the third board. Also finishing on the losing side were Bhakti Kulkarni, P V Nandhidhaa and Pon N Krithika in the top ten boards. 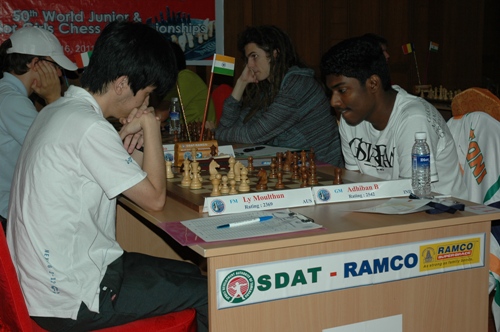 Round 5 Results (Open) (Indians unless specified)

Round 5 Results (Girls) (Indians unless specified)